Sports is a signifeicant aspect of a student. Sports days in Saints indeed make students to stand on their toes. The students of Saints will go to the field for two days to see who can prove best above all to build a bond freindship and companionship. There are 4 houses which are equally competent and equally good. The four houses will have their day on the 26th and 27th of this month. All the parents and wellwishers are invited for this event. Students are very much in the mood of game and we hope all the students, staff, and parents will have a wonderful time in the field. We wish the four houses all the very best.
Posted by JMD at 4:31 AM 1 comment:

Dear Old students of St. Stanislaus college, please do join us and you can express your thoughts and comments to this blog.
Posted by JMD at 9:10 PM 2 comments: 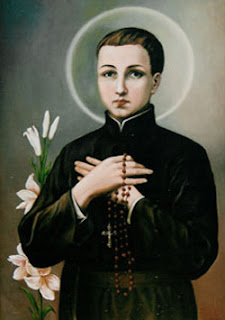 Stanislaus Kostka was born on October 28th, 1550 in Rostkovo, Poland. His father, John Kostka, was a Senator of the Kingdom of Poland, and his mother, Margaret, was the aunt of a Chancellor of Poland. Stanislaus was the second of seven children, He and the rest of his siblings were first taught at home under the care of a tutor.
In July, 1564, when Stanislaus was fourteen, he and his older brother Paul were sent to Vienna to attend the Jesuit college there. They were accompanied by their tutor, Bilinski, and three servants. Among the students at the college, Stanislaus was conspicuous not only tor his amiability and cheerfulness, but for his religious piety. It was at the college that he first tormed the idea that he wanted to be jesuit. He remained at the college for three years, until it was shut down. The Emperor had died, and his successor was Lutheran, so the college was forced to close. Stanislaus and his brother, along with their tutor went to live in a fashionable house in Vienna, continuing their studies privately.
Stanislaus and his brother were of different personalities. Paul was a man of the world, with plenty of money, and wanted to enjoy all the amusements Vienna had to offer, while Stanislaus was very religious with a strong sense of right and wrong. This led to a battle of wills between them. Paul constantly bullied his brother and rediculed his piety. Stanislaus put up with the ridicule and violence, but stood by his principles.He considered Paul's way of life wrong and refulsed to join him. Eventually, Stanislaus fell ill, so ill that his tutor thought he was going to die. Stanislaus asked for a priest to administer the last sacraments, but the landlord, who was Luthera, would not allow a priest into the house. One ight, Stanislaus had a vision of the Virgin Mary, who spoke to him and told to become a Jesuit. In the morning Stanislaus was found to be well.
For many months stanislaus had wanted to be Jesuit, But he hesitated. If he mentioned it to his brother, it would bring on more jeering and bullying. In addition, because his father was a nobleman, he regarded it as a disgrace for his son to become a priest and a Jesuit. After his recovery he hesitated no longer, and applied to the Provincial of the Jesuits asking to be admitted to the Society of Jesus. The Provincial, knowing that trouble from Stanislaus' father would follow, refused to admit him unless he obtained permission form his father. However, Stanislaus was advised by a priest that the only way he could realise his ambition was to apply to Fr. Peter Canisius, the Povincial of Upper Germany, who was at Augsburg, and therefore no so close to Prince John.
On the morning of the day he left, he told his servant to notify his brother and tutor that he would not be back for dinner. He then began his journey, taking the first opportunity to exchange his gentleman's clothes for those of a beggar. When evening came and Stanislaus had not returned, his brother and tutor formed a search party started to follow him, but not able to catch up with him.
Stanislaus walked the 300 miles from Vienna to Augsburg, he pleaded with the provincial, Peter Canisius to allow him to enter the Society.After hearing his story, Peter Canisius agreed to accept Stanislaus intothe Society. However, stnislaus felt that he was still too close to Poland, and that his father would demand that he return home. He therefore asked to be sent to Rome in October, 1567. He was then admitted by the general of the order, Francis Borgia to the jesiot novitiate ( a period of training in relegious lifeand prayer) 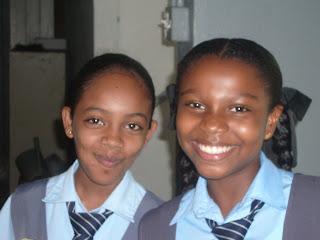 According to the testimony of the master of novices,Staislaus was a model of religious perfection. Inspite of his delicate constitution, in the novitiate, Stanislaus became ill on august 10th, 1568. At three o' clockin the morning of August 15th, he said that the blessed virgin Mary and the saints were around him, and he quietly and happily died, a fewmonths short of his eighteenth birthday,
Stanislaus was beatified in 1605, and canonized on December 31st, 1726. St, Stanislaus is a patron saint of youth, and many religious institutions have chosen him as their patron saint. His feast day is lebreated on Novemer 13.
Posted by JMD at 7:56 PM 1 comment: 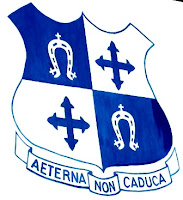 AETERNA NON CADUCA- Translated as " Not for this life only, but for eternity" The Motto is a reminder to all students that the college is firmly committed to the inculcation of the ideals of service and love of God and neighbour, and to the building a society where peace and justice can prevail, and where there can flourish spiritual calues and respect for the religious and cultural traditions of all.

ST. STANISLAUS COLLEGE CREST
The Saint Stanislaus College Crest is derived from the coat of arms of St. Stanislaus Kostka's family. Their family was traced backed to a general in the 10th century who invented a special type of horseshoe( with spikes) by which his troops defeated the russian army on the ice, hence the horseshoe on the coat of arms. When the family became Christian, a cross was added to the horseshoe.
Posted by JMD at 6:23 PM 1 comment:

History of the College. 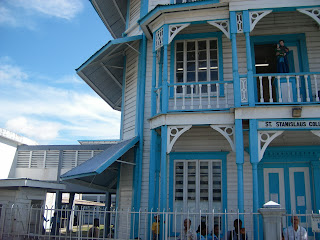 St. Stanisluas college began as a Roman Catholic school run by the Jesuits. Infact, it was a Catholic shool for one hundred and ten years, until it was taken over by the Government. In October 2005 a Board of Governers was appointed by the Ministry fo Education to have overall responsibility for the college.
On may 1st 1866, the catholic grammar school was opend. I was situated in the presbytery next to the Church of the Resurrection, which was on the site of the present Cathedral of the Immaculate Conception in Brickdam.The school was opened in May 1st, 1866, with Fr. Theobald Langton in charge, and tow boys, Marshall and Pairadeau. Fr. Langton died of Yellow Fever during the August Holidays, but the school was re-opened under Fr. S. Bond withseven boys. Fr. C.K. Wilson took over the school in october 1866, and on November 3rd, the school moved to new premises on Main Street.
In 1972, Fr. Kenneth Khan became Headmster. The workshop was built in December 1974, and the College Farm in September 1975. The college becmae co-ducational in 1975, with an enrolment of 36 girls, 12 in each first form. In 1976, after being a Catholic institution for 110 years, the college became a government school. In 1980, with the removal of Fr. Kenneth Khan as headmster by the Mistry of Education, the Jesuit connection ended, and the Jesuits on the staff were assinged elsewhere. The last Jesuit on the Staff was Fr. Fred Rigby.
From 1980 to the present time, all headteachers have been appointed by the Ministry of Education. Mr. Clarence Trotz became the first non-Jesuit headmaster of the College since 1872. He served from 1980 to 1982, with Mr. Dinband Khusial serving from 1982 to 1984. mrs. Hazel Sargeant , the first female headteacher, served from 1984 to 1988, Mr. S. K Singh served from 1988 to 1990, and Mr. B. Tihal from 1990 to 1992. In 1991, the 125th anniversary was observed. The commemorations included a mass held at the cathedral of the Immaculate Conception, at which the chief celebrent was former headmaster Fr. J. Hopkinson.
Mrs. Zohora Singh was headmistress from 1992 to 1996, and Mr. Murdwaj Singh served from 1996 to 1999. Mr. James E. fanfair served as headmaster from 1999 to 2002 and he was followed by Mrs. Esther McGarrell, who is the present headmistress.
Posted by JMD at 5:11 PM No comments: