The Honourable Vibert A. Lampkin is a recently retired judge of the Ontario Court of Justice. Throughout his career, he earned a reputation as a leader of the court, a trailblazer and a mentor to the many lawyers who appeared before him.
Born in Guyana, he earned his first law degree from the University of London in 1957 and successfully wrote the final examination of The Law Society of England in 1958. He was admitted to the Roll of Solicitors in Guyana in 1959 where he had a general law practice until June 1967. He was admitted to the Roll of Solicitors in England in 1965, and then called to the Ontario Bar in 1969. He earned his Master of Laws degree from York University in 1977.
He practised with the firm Rosenfeld, Schwartz, Malcolmson, Lampkin & Levine until 1982 when he was appointed to the Provincial Court (Criminal Division), which was renamed the Ontario Court of Justice in 1999. He was one of the first Black judges in the province.
Until his retirement this year, he served in Newmarket, where he was known for his knowledge of the law, civility and contribution to the body of criminal law, with 286 reported cases. Everyone who appeared or worked in his court was aware of his respect and compassion for people.
Mr. Lampkin's judicial philosophy is summed up in an often-quoted passage from his mentor, Lord Denning, writing in Packer v Packer in 1954:

What is the argument on the other side? Only this, that no case has been found in which it has been done before. That argument does not appeal to me in the least. If we never do anything which has not been done before, we shall never get anywhere. The rest of the world will go on whilst the law stands still, and that would be bad for both.
Mr. Lampkin was formerly a director of Oxfam (Canada) and is director emeritus of New Leaf: Living and Learning Together Inc. He is a supporter of many charitable organizations.
http://st-stanislaus-gy.com/Academics/Topics/VibertLampkin-August03.pdf
https://www.lsuc.on.ca/uploadedFiles/PDC/Archives/Call_to_the_Bar/2008-06-20%20Lampkin(1).pdf
http://documents.mx/documents/saints-newsletter-june-2012.html

Favourite Lord Denning quote on the Rule of Law principle that no one is above the law:
'Be ye ever so high, the law is above you' (Gouriet v Union of Post Office Workers & Others, 1977, Court of Appeal).' 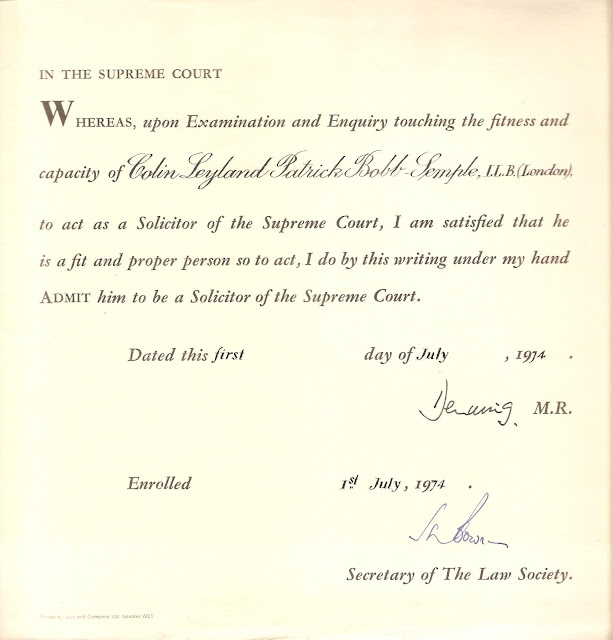 Posted by Pragmatist at 6:18 AM