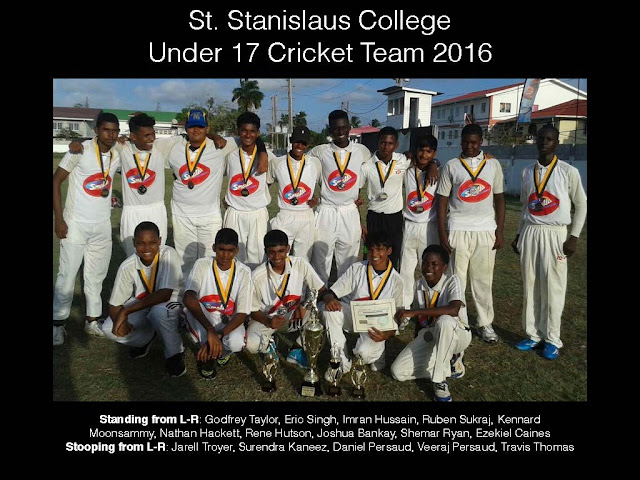 The St. Stanislaus cricket team placed second in the recently concluded Georgetown Cricket Association (GCA), Ministry of Public Health (MPH), PAHO/WHO, Guyana Diabetic Association (GDA) and Smalta sponsored under-17 T20 cricket competition. Saints was the only school competing in the tournament and was drawn in Zone ‘B’ with Transport Sports Club (TSC), Ghandi Youth Organisation and Everest Cricket Club. While Zone ‘A’ comprised of Demerara Cricket Club (DCC), Georgetown Cricket Club, Guyana National Industrial Corporation and Malteenoes Sports Club. Saints placed second in Zone ‘B’ to Transport Sports Club, but defeated the winners of Zone ‘A’ Malteenoes Sports Club in the semifinal, scoring 114-7 while restricting Malteenoes to 87-8. In the other semifinal, Zone ‘A’ runners-up DCC defeated Zone ‘B’ winners Transport Sports Club. In final Saints paid dearly for dropping national allrounder and DCC Captain Ashmead Nedd on zero, as Nedd went onto lead his team to an impressive total of 217-6, with a brutal 38 Ball century. Forced to bat aggressively from the start of their innings, Saints were outdone by the accurate pace of Bujnarine Singh, crumbling for 32. The second place finish however, was a big accomplishment for the school, considering that they were up against the more accomplished and heavily favoured club teams. The second place trophy and medals were not all the Saints boys took home, bowler Daniel Persaud received two trophies for being the bowler with the most wickets in the group stage and for best bowling figures in a group stage match. Joshua Bankay also received a trophy for being the best fielder in the group stage. Special mention must also go to Captain Kennard Moonsammy and Ezekiel Caines for their performances and leadership throughout the tournament. Many thanks also to team coach Sir Uzzi Yisrael and manager Miss Najuma Greenidge for contributing to the team’s success.

Posted by Pragmatist at 2:10 PM