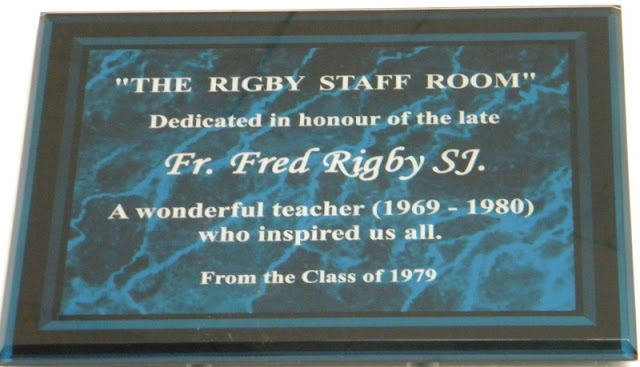 
It is now over thirty years since I came from England to Guyana to teach at the then-Jesuit college of St. Stanislaus. Fr. John Hopkinson was the Headmaster in 1969, to be followed by Fr Kenneth Khan soon afterwards. Several Jesuits were still on the Staff: Fr. Feeny, Fr. Earle, Fr. Lynch, Fr. Darke and others.

I was asked to teach French and Religious Knowledge - and later, Spanish -, and it was a most happy time. The students - all boys then - were generally attentive and well-behaved and there was little or no problem with homework. It was a great help for me to visit the homes of those in my Form; parents were usually pleased to discuss their boys' progress, and it enabled me to see, among other matters, if there were facilities for quiet study.

The College playing field was much used at the time, so there were sessions of football and cricket to supervise. Not being particularly expert at either, my role was generally just to keep an eye on the smooth running of the game.

When I was Form Master of one of the Lower School classes, there was a system of 'sides' in each class. Half were Arawaks, half were Caribs, and points were obtained for good attendance, punctuality, school work, tidiness, good behaviour. At the end of each half-term, the winning side was given a day off, so I borrowed the College minibus and drove my winners to Mahaica to spend a day at the seaside with a picnic lunch. On the return trip, there was much singing of the French songs we had learned at school. It was a wonderful way of strengthening the bonds between students and teacher.

The early 1970s passed peacefully; students continued to do well in G.C.E. 'O' Levels and 'A' Levels, but changes were coming. Co-education was introduced into the educational system in 1975. We began by admitting a percentage of girls into the First Form, gradually increasing the number each year. The first girls to come must have found it rather daunting, but they bore up bravely and survived.

President Forbes Burnham was now in 'nationalisation mood', gradually taking over everything in the country. The 'exodus' had begun; spaces began to appear on the school benches. In 1976, Burnham took over all the schools and forbade the teaching of Religion in schooltime. It was the beginning of the deterioration of educational standards in Guyana. Many good teachers emigrated and their place was often taken by 'Party' teachers, more interested in politics than in teaching. It was a great pity to see the crumbling of a long tradition at Saints, going back to its foundation by the Jesuits in 1866.

In 1979 came the tragedy of the murder of Fr Bernard Darke, bayoneted to death on Brickdam outside the Ministry of Home Affairs on a busy Saturday morning, July 14. I had been with him in the Staff Room shortly before, writing end-of-term reports. On finishing, I cycled back to 29 Brickdam and it was there I heard the shattering news. His funeral at Brickdam Cathedral filled every bench and the College Scout Troop, led so ably by Fr. Darke for many years, turned out in force.

By July 1980, I was the last Jesuit on the Staff, so my Superiors reluctantly decided to end their teaching commitment to Saints, and I was posted to the Pakaraima Mountains to do pastoral work among the Patamona Indians. What a difference from the strict timetable at Saints! I much regretted leaving the College after so many enjoyable years of teaching and school friendships but that is life. Change all around.

I now thought that my connections with Saints were over, but in the last few months, I have been pleasantly surprised. In January of this year, I was diagnosed with terminal cancer and had to return to England for treatment. Somehow, word spread among the Barbados and Toronto chapters of Saints former students, as well as in Guyana, and e-mail began to arrive by the dozen. It was wonderful to hear again from so many of my former students, some of whom I had not seen or communicated with for twenty to thirty years. It was fascinating to read their memories of classroom incidents which I had forgotten, and to appreciate their complimentary comments about the teaching they had received at Saints, to hear that many of them were now trying to inculcate those standards of honesty, integrity, loyalty, hard work and reliability that they had learned during their years at Saints.

So, looking back over the past thirty years, I have much for which to be grateful, both during my time teaching at Saints and in recent months. My greetings go out to all former students who may read this article and remember me, and to the present Staff and students now at the school. May the situation at Saints steadily improve and, with the assistance of the Guyana, Barbados and Toronto chapters, may Saints once more become a school of excellence.